Auricular Acupuncture or ear Acupuncture as it is more commonly know is similar to body Acupuncture but with ear Acupuncture stimulation is only to the external ear. It is a method of treating a variety of physiological health problems.
In 1990 the direct general of the World Health Organization proclaimed to an international gathering that – “ Auricular Acupuncture is probably the most developed & best, documented, scientifically, of all the Microsystems of Acupuncture & is the most practical & widely used”
French physician Dr Paul Nogier who according to the Chinese is referred to as the Father of Modern Ear Acupuncture discovered that the position of the ear points and zones were approximately in the position of an upside down foetus, super imposed on the external ear, with the head located around the lobe of the ear.

CAUTION : Inform Ear acupuncturist if you...
• Are pregnant or think you may be pregnant
• Have a cardiac pacemaker
• Have a cochlea ear implant
• Have epilepsy
• Have had rheumatic heart disease Are immune suppressed
• Have blood clotting problem
• Have hepatitis or HIV
• Have a heart rhythm problem. 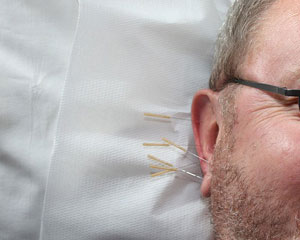